Merry’s proven marketing strategy and negotiation skills contribute to homes selling faster and higher offers for her sellers. She personally negotiates all home sale to get optimum results for her clients, she prides in exceeding each client’s highest expectations! Merry attributes her success to her dedication, experience, knowledge of the business, honesty and a tireless work ethic. 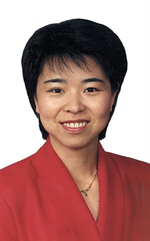 Born and raised in the China, Merry has a bachelors degree in mechanical engineer and a masters degree in marketing. After working a short time as a project manager for a famous import and export company in China, Merry emigrated to US.

In 1995, Merry began her real estate career after she bought her first home in Bayside, Queens. She fell in love with the real estate business. First ,Merry worked at a boutique real estate office for a short period of time. Then to better serve her clients and customers Merry decided to join RE/MAX in 1997.

Merry works with a vast diversity of clients and customers. She speaks two dialects, Chinese-Mandarin and Taiwanese. Her bilingual ability and good communication skills make her deals smooth and easy.

Merry Chen has been presented with the RE/MAX Lifetime Achievement Award in 2016, which honors successful agents as a lifetime achievement award during their career with RE/MAX. In 2016, less than six percent of all RE/MAX affiliates earned this prestigious award. RE/MAX has nearly 111,000 agents worldwide.

Merry Chen has been presented with the RE/MAX Hall of Fame Award in 2007, which honors successful agents as a lifetime achievement award during their career with RE/MAX.

No current listings available to display.